President Xi Jinping has told a meeting of China’s leading scientists and engineers that today’s “new generation of technology” has the capability to solve the world’s biggest challenges, and this includes food security, energy security and climate change.

This technology, that Xi said spans artificial intelligence, quantum computing, mobile communications, Internet of Things and also blockchain, has the capability to create “breakthrough applications” that can then build a new “scientific and industrial revolution.”

“We’ve actually prototyped a blockchain for an employee transfer,” David Vargas, director of the human resources line of business at OPM, said Thursday during a panel at the IBM-sponsored Think Gov conference. 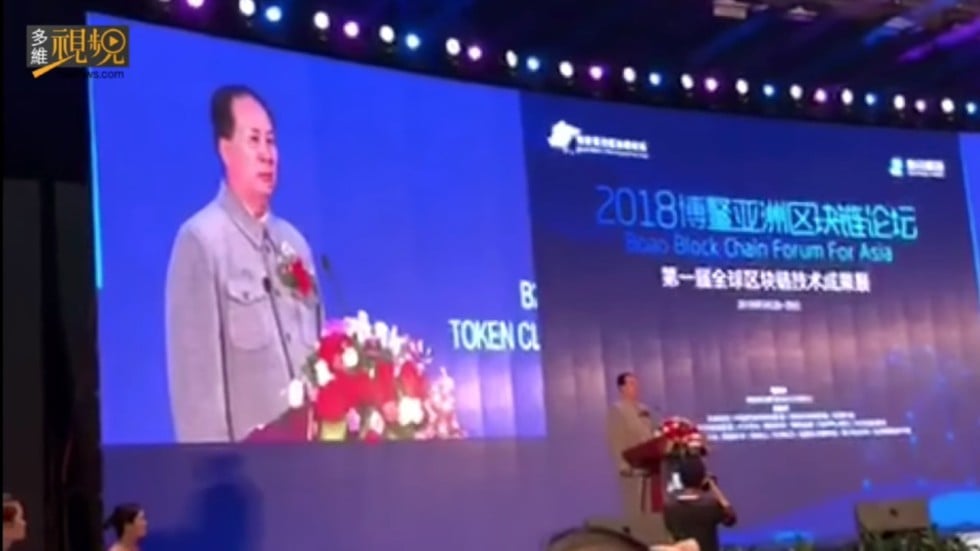 The organisers of a blockchain conference held in southern China have apologised after the event featured an actor impersonating Mao Zedong, sparking criticism online.

The lookalike, Xu Guoxiang, addressed the crowd at the Boao Blockchain Forum for Asia in southern Hainan province on Monday dressed in a grey suit and speaking in the late Communist leader’s famous Hunan accent.

“You are worthy of being called the great sons and daughters of the Chinese nation and I thank you in the name of Mao Zedong,” the actor said, according to videos posted on WeChat, a social media platform.

It is against the law in China to use the images or names of Communist Party leaders for commercial purposes. Mao is still seen by many in China as the founder of the modern nation.

The state of South Carolina slapped a cease-and-desist order to a blockchain startup due to an alleged statute violation. The company is called ShipChain and is involved in freight product tracking using ethereum-based blockchain tech. It’s also a member of the Blockchain in Transport Alliance, which counts JD.com, FedEx, and other major companies in the shipping industry among its echelon.

To be specific, the order highlights that ShipChain continuously proffered investment opportunities to South Carolina residents via digital token despite the startup being unregistered to conduct such business. If the order passes, it will mandate ShipChain to cease “participating in any aspect of the securities industry in or from the State of South Carolina.”

The fledgling shipping business has 30 days to request a hearing on the case. When granted audience, the startup can dispute that the tokens offered do not qualify as an unregistered securities offering. The company writes on its website that customers can pay via tokens to book freights for shipping products. The tokens are the only form of payment that the platform acknowledge.

In Texas, a Bitcoin investment startup has also been hit with a cease-and-desist order earlier this month due to the company conducting business without being registered to the proper agency. The order outlined that the startup lured investors with blinding numbers that return on their investments is 100 percent guarantee in just 21 days with no risk whatsoever. This type of businesses are classic scams that are taking advantage of the growing popularity of blockchain and cryptocurrency.

China’s State Council, the country’s central administrative branch of government, has sent its highest-level order demanding that local authorities speed up blockchain technology development, it was revealed on Thursday.

The order, first issued by the State Council on May 4 to provincial and municipal governments, addresses a variety of strategies required to continue the reformation of the Guangdong Pilot Free-Trade Zone.

One area of focus is to accelerate the development of financial technologies, which includes the expedition of “developing and implementing blockchain applications under existing regulatory frameworks,” the document states.

Authorized by the State Council in 2014, the Guangdong Free-Trade Zone is a designated region within China’s Guangdong province that integrates with Hong Kong and Macau to build a more internationalized free market.

The article, “ MBA view: will bitcoin regulation undermine its value? ” (May 16), made disappointing reading, as my fellow MBA colleagues were unable to go deeper than the superficial analysis of bitcoin prevalent in mainstream discourse.

Firstly, bitcoin is not simply a new asset like oil or equities. Bitcoin is a monetary asset, and thus, by definition, is entirely speculative in nature. Bitcoin is thought to be the hardest money created to date, epitomising the school of Austrian Economics. Due to totally inelastic supply and variable demand, volatility will remain high until the rate of entry of new money into the ecosystem is dwarfed by that already inside.

More at: Regulators will struggle to rein in resilient bitcoin – Financial Times

On May 8, 2018, the Subcommittee on Oversight and the Subcommittee on Research and Technology invited four witnesses, two from the public sector and two from the private sector to discuss blockchain applications. The hearing, titled “Leveraging Blockchain Technology to Improve Supply Chain Management and Combat Counterfeit Goods” can be viewed in its entirety on YouTube.

Although mostly serving as an educational forum to allow various members to express their views on the applications of blockchain technology, it was a pleasant surprise how positive several politicians and government officials were on blockchain.

Notably, Republican Congressman Barry Loudermilk expressed happiness that this topic was finally being discussed at the government level, describing himself as feeling like “a little voice in the wilderness on blockchain” and also stating that “it could be a solution to a lot of our cybersecurity and data protection issues.”

More at: US Congressman Describes Blockchain As ‘World-Changing’ – [blokt]

HB 1426, a piece of state legislation that would have created guidelines for identifying “open blockchain tokens” as securities, was voted down in the Colorado state Senate on May 9, according to public records.

The bill passed handily in the state House of Representatives, but was more controversial in the senate. According to the Denver Post, the final hours of the legislative session saw a split in both political parties. Lawmakers initially passed the measure by one vote, but the senate took another vote moments later, and “shot down” the bill 18-17 after some senators switched sides.

Senator Tim Neville (R), who co-sponsored the bill, said he had hoped it would encourage blockchain innovation in the state without having to wait for legal clarity on cryptocurrencies from federal regulators. Following the vote, Neville said:

“We usually come together to create more opportunities for Colorado companies and startups. In this case, this was an epic fail for those who chose not to support it.”

China has begun establishing national standards for blockchain technology, hoping to complete the process by the end of 2019.

While cryptocurrencies and initial coin offerings (ICOs) are prohibited in China, both regional and national governments have shown increasing support for the technology behind these platforms.  Chinese authorities are looking at implementing top-level, or “top down,” standards to compete in the global market.

According to reports, the plan for the standards has been published, and a committee to handle their development will be set up.

More at: China to set up national standards for blockchain · TechNode

The blockchain-based mobile voting platform, developed by Voatz, was only available to a select group of voters. Participants were deployed military members, other citizens eligible to vote absentee under the Uniformed and Overseas Citizens Absentee Voting Act (UOCAVA), and their spouses and dependents. Participation was further limited to voters registered in two West Virginia counties, Harrison and Monongalia.

“[The office of the Secretary believes] blockchain does provide a heightened level of security on this type of mobile voting app. We’re genuinely hoping that will allow this type of a mobile app to be made available in the future – as early perhaps as our general election – to military voters.”