A publicity stunt that involved a cryptocurrency ICO and a Mount Everest climb came to a tragic end when a Sherpa died on the journey. 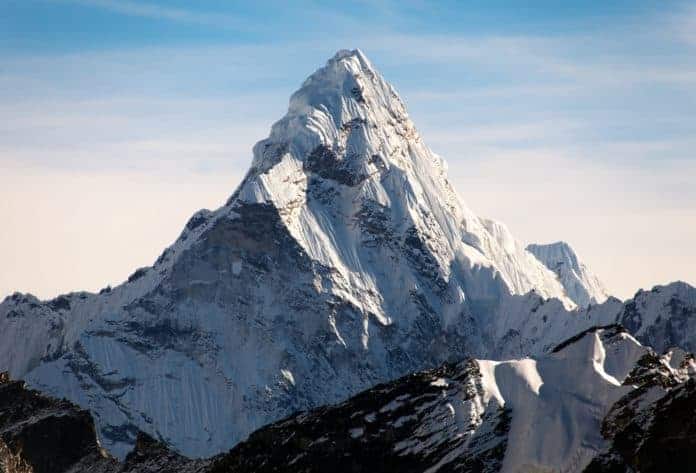 According to CNBC, ASKfm, sponsored four “cryptocurrency enthusiasts” to hike Mount Everest. The hikers were asked to place a hard drive that contained $50,000 worth of ASKfm’s digital tokens which currently have no value on top of the mountain. The Mount Everest climb was part of an initial coin offering (ICO) marketing stunt.

As reported by the Financial Times, ASKfm mentioned that:

“Of course, there were issues…two guys were stuck at above 7,000 meters with no reserve oxygen for all of that time. Under extreme temperatures and unable to descend, they had during the second day to call for a helicopter squad to rescue. Now they’re both safe and receiving treatment. And strong have made such as move.”

Unfortunately, Lam Babu Sherpa, a local Nepalese Guide who assisted the ASKfm group, died on the dangerous hike. He had a lot of experience climbing and had reached the top of the mountain many times in the past. The Ministry of Tourism of Nepal stated that the sherpa had experienced snow blindness; when one experiences a temporary loss of vision due to the reflection from the sun’s UV rays from the snow.

Stormy Daniels is rewarding her viewers with cryptocurrency, and no, it’s not Verge.

Darkreach Communications, the company which manages Daniels’ website, is working with the blockchain startup to reward viewers for watching content. This allows adult film producers to further monetize their content.

More at: Stormy Daniels Adds A Cryptocurrency Reward Program To Her Website – TechNewsGadget

Vitalik Buterin created an opinion poll trying to decide whether take an offer and join Google’s team or stay at Ethereum. The majority backs the second alternative.

Founder of the second largest cryptocurrency (Ethereum) – Vitalik Buterin has been recently approached by Google with a proposition to join the company and help the tech giant in their mysterious blockchain project. Buterin was quick to post the screenshot of the email and tweeted it on his official handle asking his followers, in a poll, whether he should be taking the job offer.

The screenshot revealed that a Google recruiter – Elizabeth Garcia has approached him in an email that states: “Hi Vitalik, I hope you are doing well and enjoying the weekend! […] Google make sense for you now or in the near future […].” In addition to the recruiter name, the screenshot also revealed information about the recruiter’s email address and her photo.

Along with the screenshot, Buterin had attached a poll asking his followers “Should I drop Ethereum and work for Google?” Before the poll was deleted, the poll had 2000 followers already voted, of which nearly 60% believed that he should not be taking the offer while the remaining 40% believed that he should join Google. One of the key reasons for Buterin to take down the tweet was because he failed to keep the recruiter’s details confidential.

Apple co-founder Steve Wozniak has given another powerful endorsement of cryptocurrency and its underlying blockchain technology, hailing its revolutionary potential at a conference on Thursday.

Speaking on stage at the WeAreDevelopers World Congress in Vienna, Mr Wozniak said he believed the blockchain will have a huge impact on the technology sector, hailing it as “the next major IT revolution that is about to happen.”

Despite his positive outlook for bitcoin and blockchain, Mr Wozniak said in a separate interview at the event that he was “bothered by what technology has become,” referencing Facebook’s Cambridge Analytica scandal.

More at: Apple founder Steve Wozniak hails bitcoin and blockchain as ‘next major IT revolution’ – The Independent

8,500 blockchain and cryptocurrency fans packed the New York Hilton Midtown to its gills this week in what organizers were calling the largest blockchain conference ever. Yet, while excitement around these technologies are indubitably at an all-time high, much of the activity at the show diverged from business reality.

The problem: most of the noise around both blockchain and crypto is little more than the community talking to itself – a massive ‘echo chamber’ that in its final analysis promises no lasting business value for its participants.

This echo chamber filled with schemers, scammers, speculators, and their various marks did not account for the entirety of the conversations at Consensus, however.

In contrast to the carnival huckster atmosphere dominating the event were firms focused on the other side of the blockchain equation: those seemingly rare but essential business models where blockchain may actually deliver real business value – in spite of all the nonsense at surrounding booths.

A bifurcation of sorts, therefore, was evident at Consensus: the sober, serious participants focused on business value vs. the insanity that is the frothy blockchain/crypto world today.

The show, held during Blockchain Week NYC, showed how massively the blockchain and cryptocurrency worlds have grown, but also highlighted that there’s anything but consensus.

The Consensus conference in New York City this week was a collision of worlds. The cryptocurrency space is fresh off a volatile price boom that put it in the global spotlight, and crypto entrepreneurs are more confident than ever that the token economy is the decentralized future of blockchain. The enterprise blockchain market, meanwhile, is looking beyond coins to deploy private, permissioned blockchains across different facets of their businesses.

When you put those two camps together, the disconnect can be comical.

On the surface, the Bitcoin-led crypto space was feeling itself. There were Bitcoin Lamborghinis parked outside the Midtown venue, while an LA startup on the show floor was selling actual 18-karat cryptocurrency emblazoned jewelry and gold coins. Startups were advertising new initial coin offerings (ICOs) with dancing mascots.

The reality of how cryptocurrencies are evolving is far more nuanced. Panels delved into complex issues like the token economy, the mining boom, and advanced cryptography. Popular coins, from Ripple to ZCash, had a big presence at the show, and there was a lot of money to go around. Unicorn crypto startup Circle announced a massive $110 million funding round, a partnership with mining hardware giant Bitmain, and a Fiat-backed coin to connect US dollars to the Poloniex exchange.

More at: There’s a Fundamental Divide in the World of Blockchain – PCMag.com

Canada: Cryptona.co has gathered report today 16th May that Jerry Pinto, the Co-President of JPMorgan Chase – the National Bank of Canada, has confirmed that the bank was considering trading Bitcoin futures. Jerry stated that in the future, cryptocurrency “will play a role.”

While speaking during an interview, Jerry, who could possibly succeed Jamie Dimon as the CEO, stated that though JPMorgan has the ability to trade Bitcoin futures, the bank has not decided yet to do so. When asked about trading Bitcoin-related products, Jerry replied:

“We are looking into that space. I have no doubt that in one way or another, the technology will play a role. If we need to clear futures of bitcoin, can we do it? Yes. Have we done it? No.”

Disclaimer: I am not an expert on cryptocurrency, but I can tell you this much: Neither are most of the people at the Consensus conference at the Hilton Midtown this week.

There’s another thing. The crypto gold rush is not entirely global. Not yet. Most of the serious money players and developers come from a handful of nations—the U.S., China, Russia, Japan, South Korea and Israel. European money is flowing into projects, with wealth managers putting money into crypto funds. Latin America hasn’t really discovered the blockchain, though Brazil has hopped on the bandwagon and will be the leader there.

It’s Blockchain Week in New York. Blame the traffic on the rain, and those guys with badges around their necks.

Startups are touting their next genius idea—a new real estate project, a new mining app, a new coin pegged to the euro. These are the people I met there. This is what they are dreaming about, how they hope to make it happen and what they think about their rivals.

Names have been changed to protect the innocent.

“If Mockba goes to the party, I’m not going to the party,” one tech reporter tells me about a Russian founder I have never met. I ask him why he wouldn’t go to one of the myriad parties being thrown in Manhattan this week. He used choice words and dropped F-bombs. “I spent a half hour listening to this joker try to sell me on his project and how he was going to raise $200 million.”

Onstage at the blockchain world’s biggest conference, bitcoin developer Jimmy Song said today that he’d be willing to take on Joseph Lubin’s proposed bet that “blockchain tech”—the use of a decentralized ledger without a cryptocurrency—won’t have any significant users in five years.

Lubin, a co-founder of ethereum who is worth between $1 and $5 billion according to Forbes, offered to bet Song “any amount of bitcoin” that blockchain tech projects by large corporations would have meaningful adoption within the next five years. Song is a blockchain skeptic whose personal wealth is unknown.

The details, Lubin said, could be ironed out on Twitter. The two shook on the bet on stage, amid cheers and hoots from the fully packed 2,500-capacity room at CoinDesk’s Consensus 2018 conference in New York City.

The cryptocurrency market is currently in a spasm of uncertainty as recent industry news sparks an ongoing selloff that has resulted in Bitcoin slipping below the $8,300 level in a one-month low. The recent announcement of Google’s ban on cryptocurrency advertising combined with movement from the US that implies a potential “crypto crackdown” has many investors dropping bags — but is the “FUD” justified?

Bitcoin has dropped to $8,300 as of press time, representing a sharp and sudden drop of almost $1,000 over the last 24 hours. The rapid plummet in price mirrors a March 9th drop to the $8,400 level, but a failure to capitalize on a swift recovery phase that brought the leading crypto close to the $10,000 level has catalyzed a sudden sell-off.

More at: No, Bitcoin Isn’t Crashing: 3 Reasons Why Bitcoin Is About to Explode – CryptoSlate