A crypto-craze fueled by digital currency volatility is bringing blockchain technology, the digital ledger system that underlies such currencies, into the spotlight. At the same time, recent calls to take back ownership of personal identity are making blockchain’s decentralized nature more appealing. As demonstrated by consumer data breaches — including those affecting Orbitz, Saks Fifth Avenue and more recently, Delta Airlines — our personal information is highly susceptible to fraud when stored in centralized databases. As an increasing amount of the world’s banking and commerce moves online, the temptation for mischief and theft has increased as well. However, blockchain may hold the key to keeping identities safe through its core feature of decentralization.

Blockchain could act as the foundation of the root identity question “Who Am I?” as opposed to the authentication query “Am I Who I Say I Am?” These systems can securely store and make readily available all kinds of information, including sensitive data like our financial history and health records. As consumers, our need to present this data at the time of service, or the point of sale or care, has risen with service providers’ increased online presence.

“We’ve actually prototyped a blockchain for an employee transfer,” David Vargas, director of the human resources line of business at OPM, said Thursday during a panel at the IBM-sponsored Think Gov conference.

LG, the “Life’s Good” company that makes televisions, smartphones and other electronic appliances, is getting in on the blockchain boom. Through its LG CNS subsidiary, it has created a blockchain-powered service that provides logistics capabilities for finance, communication and manufacturing firms. The platform, called Monachain, also provides a digital wallet that allows users to conduct financial operations.

Monachain’s main focus is to be a digital authentication system, followed by a cryptocurrency and a digital chain management tool. It has developed a new identification system, a decentralized identifier, enabling personal identification as well as online smart device payments. LG CNS is currently working on securing agreements with a number of banks to expand its cryptocurrency offering to a larger customer base.

In a statement, an LG representative said the Monachain “can help business owners boost productivity as the company provides a digital supply chain management system that enables suppliers to manage the entire production processing efficiently.” Indeed, blockchain technology has already shown to provide huge benefits to logistics and supply chain operations. The results have been documented extensively, creating greater efficiency and customer safety.

More at: LG to launch own blockchain—the Monachain – Coingeek

There is a rise in the understanding of blockchain technology and the many ways it can be applied. This time, an Indian company is partnering with the government of Andhra Pradesh (AP) to design a blockchain database for collecting and storing data of its 50 million citizens.

April 2018 – The Government of Andhra Pradesh (AP), India’s eighth-largest state announced on March 28that it has signed a partnership with Shivom, a Germany-based private firm that deals in genomics and precision medicine to develop this revolutionary technology.

Naidu Chandrababu the Governor of Andhra Pradesh while speaking on the partnership reported that this blockchain based technology would improve predictive medicine in India. The governor also explained that adopting this new technology is in continuation of the country’s drive to utilize new-age technology on a large scale in India. Other application of blockchain technology includes digitalizing the land registry system and also to tackle identity theft.

A new development center located in Fintech Valley, Visakhapatnam would be established by Shivom. The facility will work closely with India’s International Institute of Digital Technology (IIDT) at Tirupati on cybersecurity and analytics.

March 07, 2018 – LAS VEGAS – Hashed Health has launched a provider credentialing solution that leverages blockchain to securely exchange information related to a clinician’s permissions to practice at a certain level or location, the industry consortium announced at HIMSS18.

The Professional Credential Exchange tool aims to simplify the process of managing provider credentials and identities for employment and verification purposes, allowing organizations and professionals to complete hiring or referral processes more quickly.

We’ve entered the golden age of personal genomics: it’s now easier, faster, and cheaper than ever before to explore the vast three-billion-base-pair terrain of the human genome. Onto the scene steps Nebula Genomics, a new startup that wants people to sequence their genomes, then sell their genetic data on the blockchain.

This may sound dystopian in the extreme, but it’s an idea whose time has come, insists Nebula’s founding trio – Harvard geneticist George Church, his PhD candidate Dennis Grishin, and ex-Google product manager, Kamal Obbad, who launched the start-up in early February. While private DNA testing companies like 23andMe and Ancestry.com charge customers for their service, then frequently sell the genetic data on to third parties, Nebula Genomics – which has more than $1 million in investments so far – wants to upend that model. It offers customers a way to profit from the process, by selling their genetic data within the hyper-secure realm of the blockchain. No other companies have had “a way of compensating the person other than through information,” Church says. “So far the only value that’s been prescribed is value to the companies, not the individuals.”

More at: This startup wants you to sell your genetic data on the blockchain – WIRED UK

In case you’ve been living under a rock, cryptocurrencies have pretty much been the talk of Wall Street and the investment community for more than a year now. Last year, the combined market value of all digital currencies added together rose by more than 3,300%, marking perhaps the single-greatest year for an asset class in history. Though things have cooled off a bit so far in 2018, the intrigue that virtual currencies bring to the table hasn’t slowed.

While there are numerous factors that investors and businesses are excited about, arguably none stands taller than the introduction of blockchain technology. 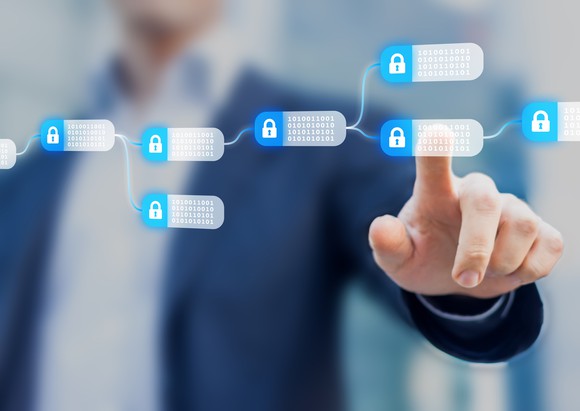 The buzz about blockchain

For those of you who are unfamiliar with blockchain, it merely describes the digital, distributed, and decentralized ledger that’s tethered to a cryptocurrency and is responsible for recording all transactions without the need for a financial intermediary. In other words, it’s a transparent logbook of all transactions that’s unchangeable and doesn’t allow banks to act as middlemen during a transaction.

Blockchain’s entrance on the center stage, which essentially occurred when bitcoin debuted in 2009, is a result of perceived flaws with the current payment platform in place at financial institutions. In particular, blockchain was seen as a way to lower transaction fees by ditching banks as the third party during transactions and to significantly speed up processing and settling times, since blockchain-based payments are proofed 24 hours a day, seven days a week. In fact, some blockchains offer the ability to process transactions almost instantly — even cross-border transactions.

To summarize, blockchain offers the potential for quicker transactions, lower fees, and perhaps stepped-up security as a result of its decentralization, which ensures that no single entity (including hackers) can ever gain control over a network or cryptocurrency.

Though financial institutions are the most logical beneficiaries of blockchain, there are countless applications beyond the realm of currencies. Blockchain can be used to make supply chains more transparent, and they can be a perfect solution for immutable medical records. But for tech-giant Microsoft (NASDAQ:MSFT), blockchain is being viewed as the perfect solution for digital identities.

More at: This Is Really Happening: Microsoft Is Developing Blockchain ID Within Its Authenticator App – The Motley Fool

Announced during the World Economic Forum at Davos in Switzerland yesterday, the alliance – which aid agency Mercy Corps and the U.N. International Computing Center have also just joined – aims to improve people’s lives through provision of digital identities.

According to a press release, the group is developing solutions with a focus on user’s direct ownership and control over their personal data using blockchain technology. At issue is the fact that over 1.1 billion people face not able to prove their identity, and thus struggle to access benefits and services. The situation also gives rise to more serious issues such as human trafficking, according to the World Bank.

In the wake of the Equifax breach and countless others compromising Americans’ privacy, one thing has become clear: It’s time to get rid of Social Security numbers.

While a string of digits on a paper card did the job in the 1930s, and got the government’s stamp of approval for identification purposes in 1972, it’s irresponsible for those nine numbers to continue to be the universal identifier for every part of our lives. We can do better; even the White House says so.

But the natural follow-up question—“What’s the replacement?”—is where things get complicated. We could have a digital, national ID card system like Estonia, but that’s proven to have its own security issues. We could use biometric technology to validate identities, using retina scans or facial recognition software, but these systems aren’t foolproof.

What about blockchain? Does the new, buzzy technology have the potential to one day replace Social Security numbers?

Moldova, an Eastern European country and former Soviet republic, is planning to use blockchain technology to stop child trafficking.

United Nations recently teamed with blockchain firm World Identity Network (WIN) to explore the use of new technologies and solutions, such as digital identity on the blockchain, to increase the chance of catching traffickers and securing data on an immutable ledger, further making any such trafficking attempts more traceable and preventable.

Digital identification experts from the UN Office for Project Services (UNOPS) recently met with officials in Chisinau, the capital of Moldova, to discuss how blockchain can help solving the exploitation of children.

More at: Moldova to Use Blockchain Technology to Eradicate Child Trafficking – BlockTribune